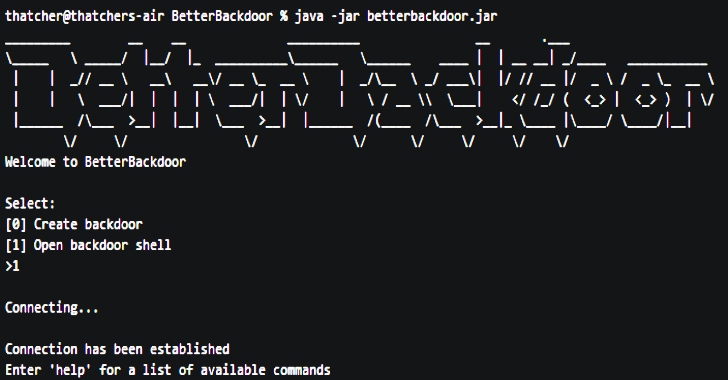 BetterBackdoor is a backdoor is a tool used to gain remote access to a machine. Typically, backdoor utilities such as NetCat have 2 main functions: to pipe remote input into cmd or bash and output the response.

This is useful, but it is also limited. BetterBackdoor overcomes these limitations by including the ability to inject keystrokes, get screenshots, transfer files, and many other tasks.

BetterBackdoor can create and control a backdoor.

This created backdoor can:

This backdoor uses a client and server socket connection to communicate. The attacker starts a server and the victim connects to this server as a client. Once a connection is established, commands can be sent to the client in order to control the backdoor.

To create the backdoor, BetterBackdoor:

To start the backdoor on a victim PC, transfer all files from the directory ‘backdoor’ onto a victim PC.

This will start the backdoor on the victim’s PC.

Once running, to control the backdoor you must return to BetterBackdoor and run option 1 at start while connected to the same WiFi network as the victim’s computer.