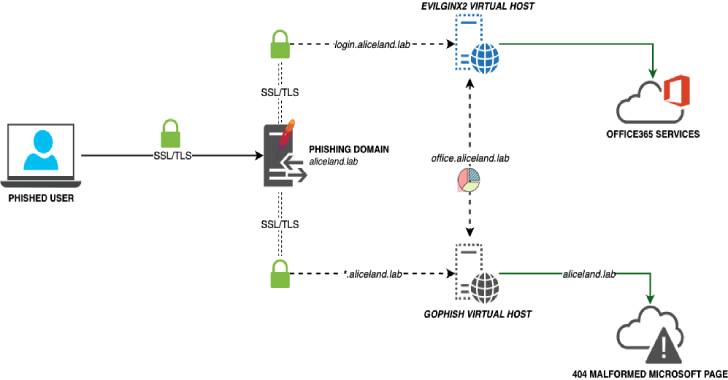 As a penetration tester or red teamer, you may have heard of evilginx2 as a proxy man-in-the-middle framework capable of bypassing two-factor/multi-factor authentication. This is enticing to us to say the least, but when trying to use it for social engineering engagements, there are some issues off the bat. I will highlight the two main problems that have been addressed with this project, although some other bugs have been fixed in this version which I will highlight later.

This project is based on this blog and I encourage you to read it before getting started. In this setup, GoPhish is used to send emails, track opened emails, and provide a dashboard for evilginx2 campaign statistics, but it is not used for any landing pages. To provide tracking between the two, the function resposible for providing campaign results inside GoPhish has been modified to instead get clicked link event details and submitted data event details from logs related to evilginx2. Your phishing links sent from GoPhish will point to an evilginx2 lure path and evilginx2 will be used for landing pages. This provides the ability to still bypass 2FA/MFA with evilginx2, without losing those precious stats. The operator will also be informed of a submitted data event in realtime. This should ensure the operator won’t run out of time to use captured cookies, or at least be informed as soon as possible. The operator will still need to bounce over to the evilginx2 terminal to fetch the full JSON string of captured tokens/cookies.

Assuming you have read the blog and understand how the setup works, setup.sh has been provided to automate the needed configurations for you. Once this script is run and you’ve fed it the right values, you should be ready to get started. Below is the setup help (note that certificate setup is based on letsencrypt filenames):

In case you ran setup.sh once and already replaced the default RId value throughout the project, replace_rid.sh was created to replace the RId value again.

Once setup.sh is run, the next steps are: