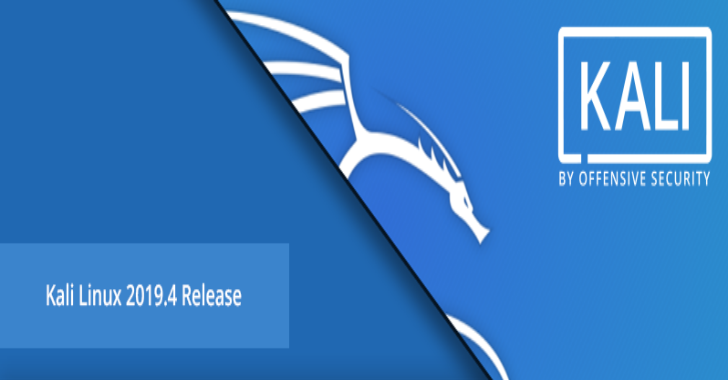 We are very excited to announce our 2019 fourth and final release, Kali Linux 2019.4, which can be downloaded immediately. This brings the kernel up to version 5.2.9 and includes a variety of new features across the board including NetHunter, ARM and packages (plus fixes and updates for normal bugs).

So now let us have a detailed look on the same;

A long time has come for an upgrade to the desktop environment. Since months now, we’ve been thinking about how to fix it, what we needed to do, experimenting with different methods, and so on.

We had a few issues that we wanted to address head-on as a summary like Performance issues, Fractured user experience and Modern look.

In order to sort this issue, they have tracked down Daniel Ruiz de Alegría and started the development of a new theme running on Xfce. They considered Xfce, since addressed them best while still being accessible to the majority of users.

We’re very excited about this new UI update, and it’s going to love all kali users. But as the UI can be a little like religion, don’t worry if you don’t want to abandon Gnome.

They still have a Gnome build for you, with a couple of changes in place. As time goes on, they’re going to make changes to all the desktop environments they release to get them “close” to a similar user experience regardless of what DE you run. Because we don’t have the resources to invest extensively in modifying all these different environments, this will be minimal.So if you’d like to see something, please submit an application for a feature!

There was also a new addition with the switch to the world where they developed the Kali Undercover theme, a Kali theme that looks like Windows to the casual view.

So if you’re working in a public place, hacking away, and you may not want to see and wonder what you’re doing with the distinctive Kali dragon for everyone. So, a little script that will convert your Kali theme into a default installation for Windows.

You will work a little bit more incognito that way. After you’re finished, run the script again and switch back to your Kali theme in a more private place. It’s like magic!

The NetHunter Kex also has the new release. In a nutshell, this allows you to attach your Android device together with the Bluetooth keyboard and mouse to an HDMI output and get a full Kali desktop, no compromise. Yes. From the phone.

This is a feature that you have to trust. You’re not going to fully appreciate what this does until you see it. This is very close to using a good full-featured portable ARM desktop that fits in your pocket with a powerful enough phone. There are major ways in which you can exploit this in assessments.

Check out their docs by clicking here to get a complete breakdown on how to use NetHunter Kex.

With the latest 2019.4 release, 8 GB of ARM sdcards will be supported and a 16 GB sdcard will be the minimum we support in 2020.1. But users will always be able to create their own image if you want to support smaller cards.

As per the report, a small number of devices did not display the Kali menu properly during the launch trial. This was not important enough to delay the release, so you can run the following command instead as a work-around to view the menu properly:

Log out once this is finished, so you’re back at the login manager. Then switch to a console using CTRL+ALT+F11 (the key pointing to the left next to the ESC key on the Chromebooks).

Login and then run:

The list will have the right entries after rebooting. We’re just looking at why this happens on just a few of the videos.

If you already have an existing Kali installation, remember you can always do a quick update:

If you want to switch to our new Xfce:

NOTE: The output of “uname -r” may be different depending on architecture.