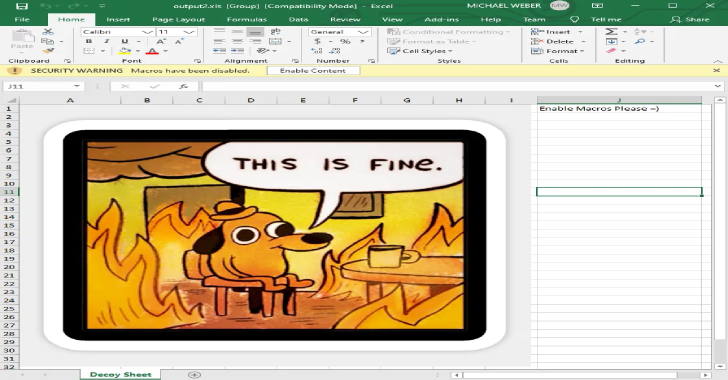 Macrome an Excel Macro Document Reader/Writer for Red Teamers & Analysts. Blog posts describing what this tool actually does can be found here and here.

Clone or download this repository, the tool can then be executed using dotnet – for example:

Note that a 5.0+ build of dotnet is required for this to work as configured – it can be grabbed from https://dotnet.microsoft.com/download/dotnet/5.0.

Binary releases of the tool that do not require dotnet and contain an executable binary can be found in the Release section for Windows, OSX, and Linux.

Run Macrome by either using dotnet run from the solution directory, or dotnet against the built Macrome binary. There are three modes of operation for Macrome – Build mode, Dump mode, and Deobfuscation mode.

How SHOULD I run this?

The rest of the documentation will explain each flag/function in detail, but right now the “latest & greatest” that Macrome has to offer can be obtained by running:

First generate a base “decoy” Excel document that will contain content users should see. This should be some sort of lure that convinces users to click the “Enable Macros” button displayed in Excel. There’s some examples of the “latest and greatest” lure creation at https://inquest.net/blog/2020/05/06/ZLoader-4.0-Macrosheets-. Once this sheet is created, save the document as type Excel 97-2003 Workbook (*.xls) rather than the newer Excel Workbook (*.xlsx) format. An example decoy document is included in /Docs/decoy_document.xls. Note that if you are using XOR Obfuscation to protect your document, you currently CANNOT add an image to your decoy.

Next, generate a shellcode payload to provide to the tool. The example binary payload (which pops calc) was generated using msfvenom using the following parameters:

This payload can then be embedded by executing the command:

Currently 64-bit payloads will require that an x86 payload is also provided. If this isn’t an issue, you can just specify garbage for the x86 payload flag.

There is eventual support for embedding .NET assemblies directly in the document, but if you want to do that right now I’d suggest using EXCELntDonut.

As of the Macrome 0.5.0 and above, all payloads will be encoded with base64, so your payload will be able to contain any byte sequence (including null bytes).

If you want to embed a .NET executable using Macrome, I suggest using Donut with the command donut.exe -a 3 -b 1 -z 1 executableToEmbed.exe, and then embedding the resulting payload as both your 32-bit and 64-bit payloads.

Another solid alternative is Amber which has worked great for embedding some pretty sizable Go binaries.

If for some reason you want to use the legacy payload encoding mode from pre-Macrome 0.5.0, use the --payload-method flag with SheetPackingMethod. Note that in the legacy mode using a majority alpha-numeric payload will reduce the size of the macro file generated since it’s easier to express letters and numbers in macro form instead of appending CHAR function invocations repeatedly like =CHAR(123)&CHAR(124)&CHAR(125)... etc. But the tool should be able to handle a completely unprintable binary payload as well.

Similar to binary payload usage, a decoy document must first be generated. Next, a text file containing the macros to run should be created. Macros should have columns separated by ; characters and rows separated by newlines. Currently the content of macros specified will be written and executed beginning at A1 – though future support will be added to allow specifying the start location. Example macros can be found in /Docs/macro_example.txt and /Docs/multi_column_macro_example.txt.

Note the usage of the payload-type flag set to Macro.

You can generate a macro yourself, or you can use the wonderful EXCELntDonut tool to create a macro for you.

These will be detailed in an upcoming blog post, but Macrome can now encode macro payloads in three different ways. Most of these are still undetected by any AV – but experiment with your payloads to see what works best.

Specify an encoding by using the method flag when building – for example, to use the CharSubroutine encoder:

Sometimes you may want certain macros to run BEFORE the payload code does. This is helpful for when you’re adding macros for sandbox evasion and/or verifying that your payload is running on the correct host.

The format for preamble files is exactly the same as when using payload-type Macro, but it only supports a single column. For example, you could have a preamble of:

This would check for screen resolution values, the presence of a mouse, and the ability to play sound. If any of these failed, then the app would close before running the main payload content.

Additionally, if you would like a preamble macro to evaluate IMMEDIATELY, rather than after unpacking the rest of the macros, you can preface a command with %%%%%. For example:

This is helpful for minimizing the number of XLM commands run before killing the document and can be helpful for more immediate reactions to the presence of sandbox indicators.

Macrome 0.3.0+ support password protecting of documents using XOR Obfuscation, a legacy encryption mode from MUCH older versions of Office. This encryption mode is often unsupported by IR tooling and can help protect document content against inspection.

Excel has a “default” password of VelvetSweatshop, which will allow you to encrypt the document content while still making the document automatically decrypt when opened. This is the “ideal” way to use XOR Obfuscation in an offensive context. Macrome will automatically attempt to use this password when deobfuscating or dumping a document.

To use this functionality, simply add --password <passwordToEncrypt> to your build command.

Run Macrome with the dump command to print the most relevant BIFF8 records for arbitrary documents. This functionality is similar to olevba’s macro dumping functionality, but it has some more complete processing of edge-case Ptg entries to help make sure that the format is as close to Excel’s actual FORMULA entries as possible. This is what I’ve been using to debug some of the weird edge case documents I’ve been generating while making this tool, so it’s comparably robust. I’m sure there’s tons of edge cases that are not supported right now though, so if you find a document that it doesn’t properly dump the content of, please open an issue and share the document as a zip file.

The dump command only requires a path argument pointing at the target file. An example invocation is:

Most of the flags that the dump command are for debugging, but the dump-hex-bytes may be useful for users who want to see the individual byte payloads for relevant records. This is similar functionality of BiffView, though only maldoc specific entries will be displayed by default.

NOTE: This doesn’t do very much yet, it’s mainly meant to demonstrate how using the modified b2xtranslator library can help automate deobfuscation. More useful features are coming soon.