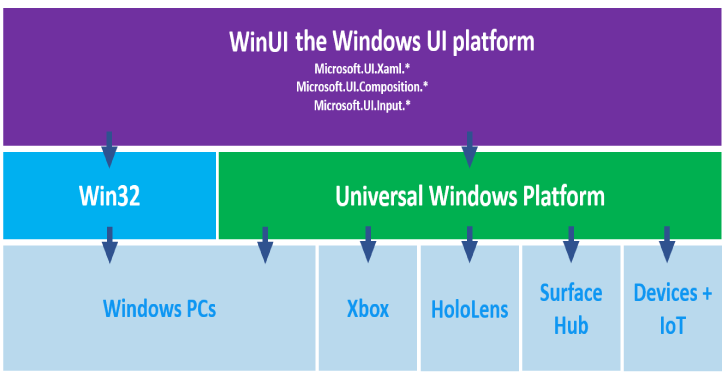 WinUI is the native UI platform for Windows 10. This document outlines the prospective roadmap for new website through 2019 and into 2020.

It is under active development by the Microsoft developer platform team and the roadmap will continue to evolve based on market changes and customer feedback, so please note that the plans outlined here aren’t exhaustive or guaranteed.

We’re also working with the Uno platform so that developers can bring their microsoft-ui-xaml code anywhere WebAssembly runs – including Windows 7.

2.4 will be an incremental release that includes new microsoft-ui-xaml features and fixes for UWP apps on Windows 10.

For installation instructions see Getting started with the Windows UI Library.

WinUI 2 will eventually be superseded by WinUI 3. WinUI 3 will include all the controls and features in WinUI 2.

WinUI 3 will greatly expand the scope of microsoft-ui-xaml to include the full Windows 10 native UI platform, which will now be fully decoupled from the UWP SDK.

You can download an early build of WinUI 3.0 Alpha to try out – we’d love feedback on it, although please note it’s a very early build with lots of missing features.

The existing UWP Xaml APIs that ship as part of the OS will no longer receive new feature updates.

They will still receive security updates and critical fixes according to the Windows 10 support lifecycle.

All new Xaml features will just be developed and ship as part of microsoft-ui-xaml instead.

WinUI 3 will provide a number of benefits compared to the current UWP Xaml framework, WPF, WinForms and MFC which will make microsoft-ui-xaml the best way to create Windows app UI:

Our primary focus for WinUI 3.0 is to decouple the UWP UI framework (Xaml, composition and input) while maintaining high compatibility with existing UWP APIs and behaviors to help make the update to WinUI 3.0 easy for existing UWP apps.

This means we won’t be adding many new features in the first WinUI 3.0 release.

However, we are planning at least a few new features, including:

It should also be straightforward to add microsoft-ui-xaml views to existing Win32 apps using Xaml Islands.

For existing UWP Xaml apps there will be some updates required when migrating to WinUI 3.0.

The next major milestones we’re currently working toward are: