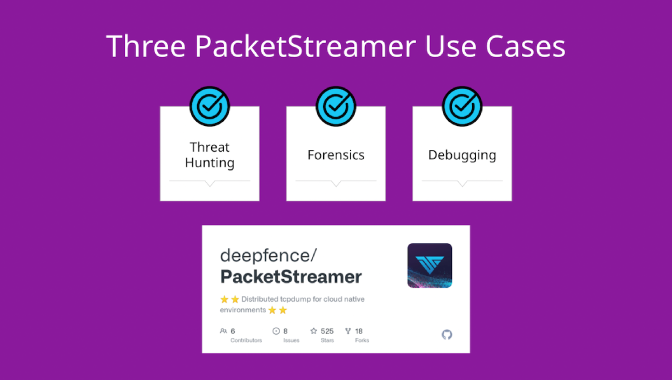 PacketStreamer is a high-performance remote packet capture and collection tool. It is used by Deepfence’s ThreatStryker security observability platform to gather network traffic on demand from cloud workloads for forensic analysis.

PacketStreamer sensors are started on the target servers. Sensors capture traffic, apply filters, and then stream the traffic to a central reciever. Traffic streams may be compressed and/or encrypted using TLS.

PacketStreamer sensors collect raw network packets on remote hosts. It selects packets to capture using a BPF filter, and forwards them to a central reciever process where they are written in pcap format. Sensors are very lightweight and impose little performance impact on the remote hosts. PacketStreamer sensors can be run on bare-metal servers, on Docker hosts, and on Kubernetes nodes.

The PacketStreamer receiver accepts network traffic from multiple sensors, collecting it into a single, central pcap file. You can then process the pcap file or live feed the traffic to the tooling of your choice, such as Zeek, Wireshark Suricata, or as a live stream for Machine Learning models.

Use PacketStreamer if you need a lightweight, efficient method to collect raw network data from multiple machines for central logging and analysis.

For full instructions, refer to the PacketStreamer Documentation.

You will need to install the golang toolchain and libpcap-dev before building PacketStreamer.