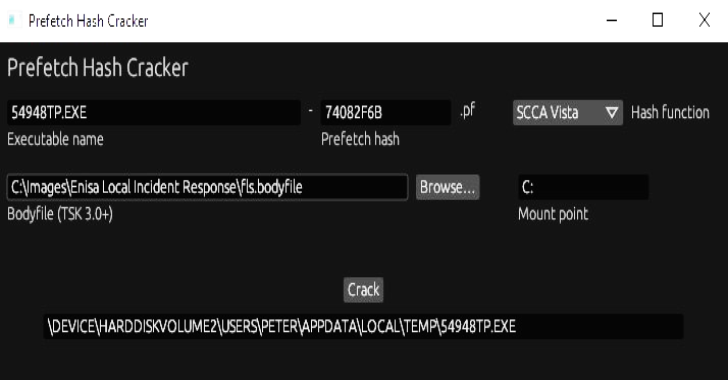 During the forensic analysis of a Windows machine, you may find the name of a deleted prefetch(Prefetch-Hash-Cracker) file. While its content may not be recoverable, the filename itself is often enough to find the full path of the executable for which the prefetch file was created.

The following fields must be provided:

There are 3 known prefetch hash functions:

A bodyfile of the volume the executable was executed from.

The bodyfile format is not very restrictive, so there are a lot of variations of it – some of which are not supported. Body files created with fls and MFTECmd should work fine.

The mount point of the bodyfile, as underlined below:

How does it work?

The following cases are not supported:

If the executable name is longer than 29 characters (including the extension), it will be truncated in the prefetch filename. For example, executing this file:

From the C:\Temp directory on a Windows 10 machine, will result in the creation of this prefetch file:

In this case, the executable name cannot be derived from the prefetch filename, so you will not be able to provide it to the tool.