Singularity of Origin is a tool to perform DNS rebinding attacks. It includes the necessary components to rebind the IP address of the attack server DNS name to the target machine’s IP address and to serve attack payloads to exploit vulnerable software on the target machine.

It also ships with sample payloads to exploit several vulnerable software versions, from the simple capture of a home page to performing remote code execution. It aims at providing a framework to facilitate the exploitation of software vulnerable to DNS rebinding attacks and to raise awareness on how they work and how to protect from them.

How Do DNS Rebinding Attacks Work?

It is also possible to trigger DNS rebinding before a cached DNS record expires, depending of the target platform and using a combination of techniques that are described in later sections.

Let’s say that we want to retrieve the homepage of a tool listening on localhost, port 8080, of a victim desktop machine from domain “dynamic.your.domain.” You personally own/manage domain “your.domain.” You will mount attacks from a server with IP address “ip.ad.dr.ss“. This server will run the Singularity DNS and HTTP servers.

Configure appropriate DNS records to delegate the management of a test subdomain (“dynamic.your.domain.“) of a domain you own (“your.domain.“) to the Singularity’s DNS server that we will deploy shortly:

This sample setup informs DNS clients, including browsers, that “ip.ad.dr.ss” answers queries for any subdomains under “.dynamic.your.domain.“, e.g. “foo.dynamic.your.domain.”. This also permits one to access the Singularity management console using the “rebinder.your.domain” DNS name with a web browser.

On the Attacker Host

Open a terminal and type the following command:

Start singularity-server with sudo ./singularity-server --HTTPServerPort 8080. This will use a DNS rebinding strategy based on the content of the DNS query by default e.g. s-ip.ad.dr.ss-127.0.0.1-<random_number>--e.dynamic.your.domain will return first “ip.ad.dr.ss“, the attacker host IP address, then “127.0.0.1” for subsequent queries for a limited period of time.

Note: You will need to verify that other services do not listen on ports required by Singularity.

On Ubuntu 18.04 LTS, by default, systemd-resolved is listening on the localhost UDP port 53. This will prevent Singularity from starting. Disable systemd-resolved with this command: sudo systemctl disable --now systemd-resolved.service. Next, update the file /etc/resolv.conf to make sure it does not contain nameserver 127.0.0.53 but something like nameserver 8.8.8.8. Replace 8.8.8.8 with the IP address of the DNS server of your choosing (e.g. nameserver 169.254.169.254 on GCP).

Singularity requires multiple ports exposed to the Internet (or at least to the network from which you access the tool via your browser). The minimum required ports are UDP 53 for DNS and the port where the Singularity manager web interface is running. The default port for the manager web interface is TCP port 8080. Additionally, Singularity requires that the payload is served from the same port where the vulnerable/exploited application is running on to not violate the same-origin policy.

Minimum required ports are listed above.

On the Victim Host

Singularity has been tested to work in the following browsers:

The above was tested with Singularity’s default conservative settings:

Much faster attacks can be achieved in certain configurations, as detailed in the table below:

We will add more platforms as we test them. We elected a delay of 3s to perform DNS rebinding to cater for targets with a poor connection to the internet/network.

When Singularity is run without arguments, the manager web interface listens on TCP port 8080. Browse to that port to configure and launch the DNS rebinding attack.

Singularity comes with a default configuration file in html/manager-config.json. You can modify this file to change the default parameters, such as the attackHostDomain, the attackHostIPAddress, and the attackPayloads. You need to edit this file if you add your own payloads. You do not need to edit the configuration file if you want to use existing payloads as you can change the parameters in the web interface.

Launch the Singularity binary, (singularity-server), with the -h parameter to see its parameters.

The manager web interface is where you configure and launch the DNS rebinding attack. It listens on port 8080 by default. The following table describes all form fields and buttons in the manager interface:

Creating Your Own Payloads

Creating your own payloads is as simple as copying the sample payload HTML file (payload-simple-fetch-get.html) and modify it according to your needs. The sample payload makes a single GET request and displays the response. Start with copying the content of this file to a new .html file and add its name to the attackPayloads list in the manager-config.json file. Then modify the new HTML file to change the request URL for example.

Depending on the application deployment model, you may have to whitelist other or additional addresses such as 127.0.0.2, another reserved numeric address for the loopback interface.

For services exposed on the network (and for any services in general), authentication should be required to prevent unauthorized access.

Filtering DNS responses containing private, link-local or loopback addresses, both for IPv4 and IPv6, should not be relied upon as a primary defense mechanism against DNS rebinding attacks. Singularity can bypass some filters in certain conditions, such as responding with a localhost CNAME record when targeting an application via the Google Chrome browser for instance.

Useful Notes and Other Loose Ends 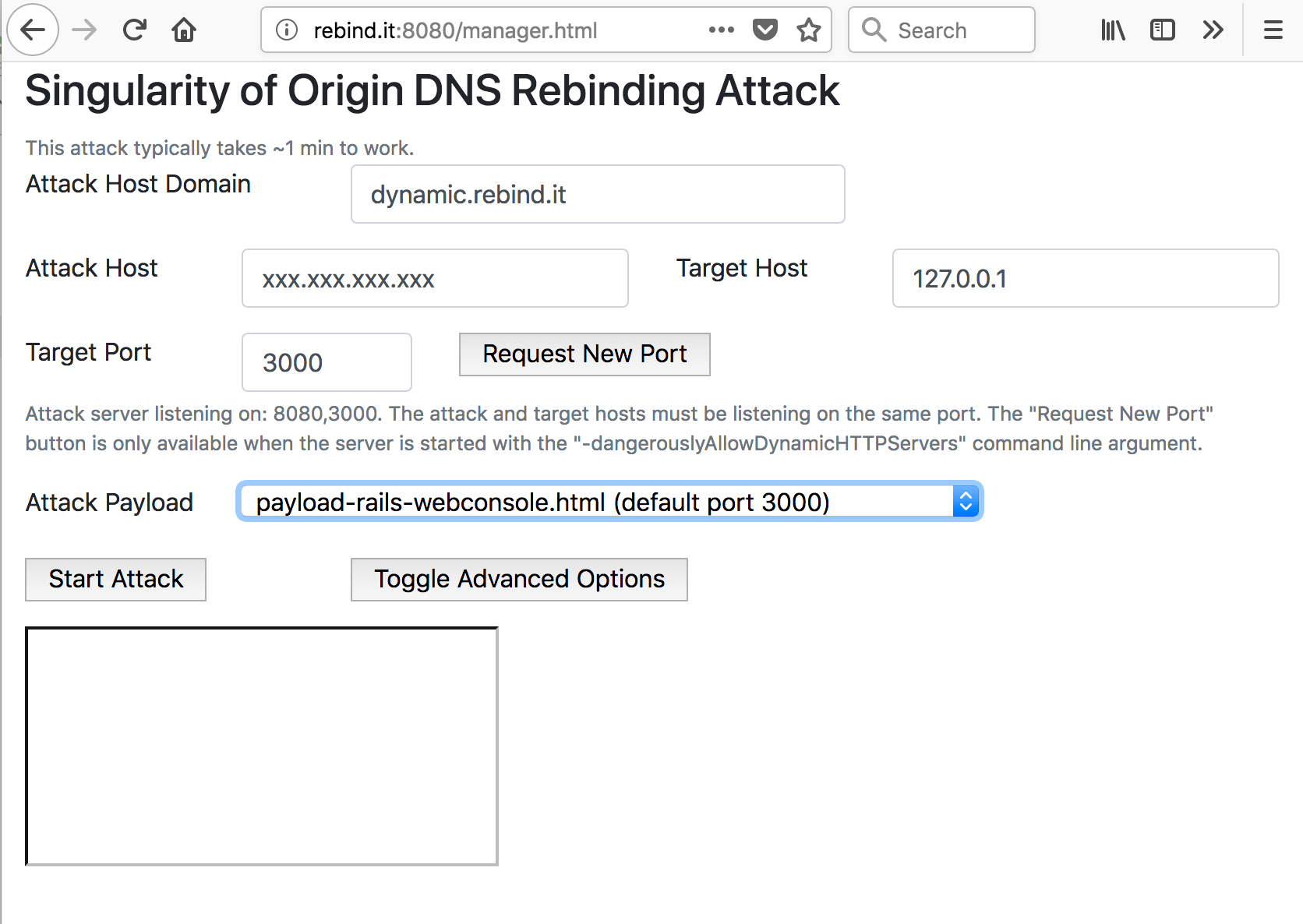 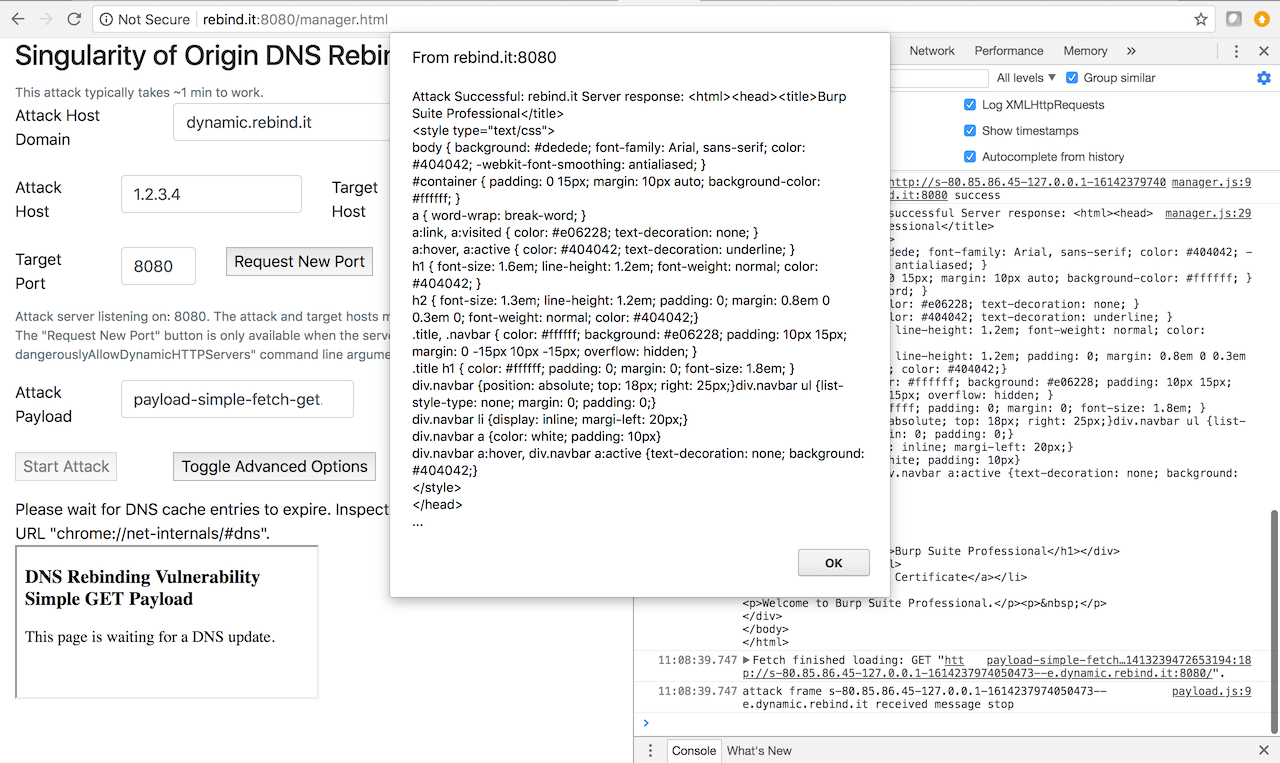 This tool was built with the purpose of showing the concept of DNS rebinding. This software should not be used for illegal activity. The authors are not responsible for its use. Only use this tool to attack systems for which you have permission to.