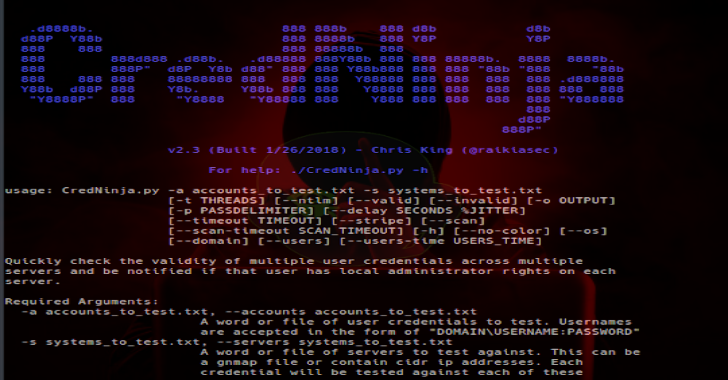 CredNinja is a multithreaded tool designed to identify if credentials are valid, invalid, or local admin valid credentials within a network at-scale via SMB, plus now with a user hunter

This tool is intended for penetration testers who want to perform an engagement quickly and efficiently.

While this tool can be used for more covert operations (including some additions below), it really shines when used at the scale of a large network.

At the core of it, you provide it a list of credentials you have dumped (or hashes, it can pass-the-hash) and a list of systems on the domain (I suggest scanning for port 445 first, or you can use “–scan”).

It will tell you if the credentials you dumped are valid on the domain, and if you have local administrator access to a host.

See below for additional features, like user hunting and host detail enumeration.

It is intended to be run on Kali Linux

v2.3 – Updated with some additional features:

AND NOW THE COOL ADDITIONS