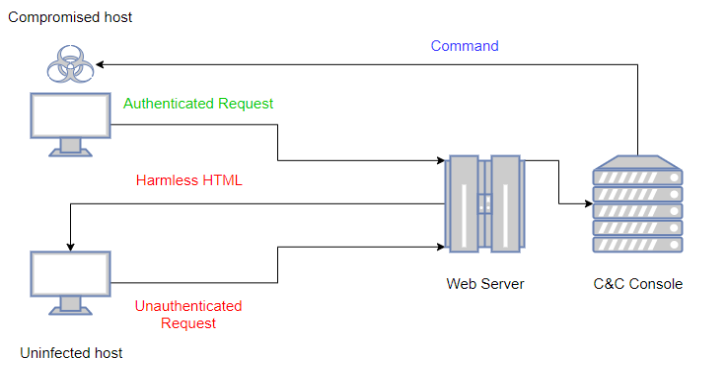 LOLBITS is a C# reverse shell that uses Microsoft’s Background Intelligent Transfer Service (BITS) to communicate with the Command and Control backend. The Command and Control backend is hidden behind an apparently harmless flask web application and it’s only accesible when the HTTP requests received by the app contain a valid authentication header.

It is composed of 3 main elements:

In order to deny proxies content inspection, all the relevant content sent between the agent and the C&C server is encrypted using RC4 with a preshared secret key. A high level diagram of the infrastructure behaviour would be as it’s shown in the following diagram:

To avoid that the Blue Team could reproduce some of the old requests and discover the C&C infrastructure, each authentication header is generated randomly and is valid only for one single cycle (a cycle is composed of a POST request followed by a GET request). Old authentication headers will be ignored and the harmless website will be displayed for those requests.

For the C&C infrastructure is required a Windows Server 2012 or above with python 3.4+ and the following python dependencies:

I recommend to grant full access rights to Everyone for the website directory (C:\inetpub\wwwroot\bits in the example) in order to avoid all kind of access denied errors. At the end this is just a C&C server…

According with the previous image, my scriptProcessor property should have the value “c:\python3.4\python.exe|c:\python3.4\lib\site-packages\wfastcgi.py”.

To obtain the reverse shell just type in python lawlbin.py on a cmd of the C&C server and execute the C# agent on the compromised host.

Since this project borns from the ashes of a previous and failed project, some of the old features have been kept. The old project was a shell where all the available commands would be executed using exclusively Living of The Land Binaries. Thats where the LOL of LOLBITS comes from, and thats why the following features run using exclusively LOLBINS (this could help to bypass AWS and some EDR filters):

Despite this features could be interesting in some environments (hmm downloading remote files without using Powershell? I like it!) I kept them just to reuse part of the old code for the C&C console. Below is a list with some features that im sure will be more usefull in a regular situation:

To get usage tips just type in help or <somecommand> help. In the future more features will be implemented, so stay tuned!