Nameles provides an easy to deploy, scalable IVT detection and filtering solution that is proven to detect at a high level of accuracy ad fraud and other types of invalid traffic such as web scraping.

While absolute measurement of detection capability is impossible, Nameles is the only detection solution that can be audited by indepedent parties and that is backed by several scientfic papers.

Nameles can detect invalid traffic on:

Nameles implements a highly scalable entropy measurement using Shannon entropy of the IP addresses a given site is receiving traffic from, and then assigns a normalized score to the site based on its traffic pattern.

Entropy have been used widely in finance, intelligence, and other fields where dealing with vast amounts of data and many unknowns characterize the problem. The use of Shannon entropy has been covered in hundreds of scientific papers. Some argue that Shannon received it from Alan Turing himself, and that it was the method Turing used for cracking the Nazi code.

Figure 1: An example deployment with a DSP 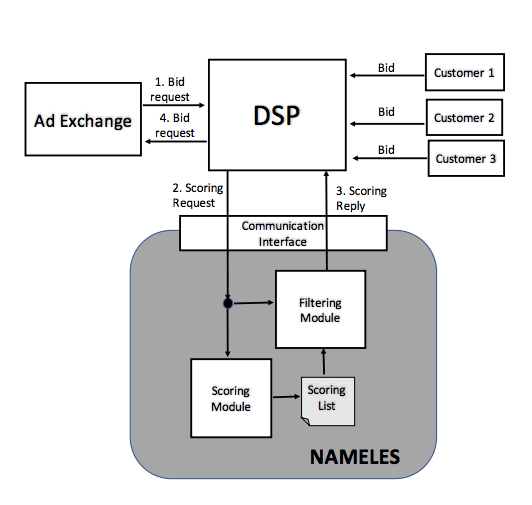 Figure 1 presents a high level representation of Nameles functional blocks. Moreover, the figure shows how Nameles could be integrated in the programmatic ad delivery chain as an auxiliary service for the DSPs. The only difference with respect to the current operation of a DSP would be that, as part of the pre-bid phase, the DSP makes a request to Nameles to provide a Confidence Score per bid request. To this end, the DSP sends a scoring request to Nameles (step 2 in Figure 3). The scoring request includes the following fields: bid request id (mapping Nameles result to the corresponding bid request), IP address of the device associated with the bid event and the domain offering the ad space. This information is included in the bid requests as defined in the openRTB protocol standard. The scoring request is delivered to two independent modules of Nameles: the Scoring module and the Filtering module.

The scoring-module runs several worker threads that pull the queries from the DSP end and push the reply messages. The workers perform a single lookup in a shared hash table for each message. Therefore, the host running the scoring-module module requires minimal memory and drive. We recommend setting a worker per CPU and running latency tests with your expected throughtput load in order to dimensionate an appropriate number of processors for the host. Note that you can run several scoring modules in your system communicating with the same data processing module.

The data-processing-module performs precomputations with the stream of data received from the scoring module. The data is periodically serialized to a PostgreSQL database. The scores are computed at the end of each day. The host of this module would benefit from having a high amount of RAM and a certain number of processors in order to reduce the score computation times. We recommend at least 64GB of RAM and 4 cores.

You can install Nameless on a single machine or a cluster of multiple machines following the instructions on section 2.1 below. There are two options:

If you install Nameles on a multiple machine docker cluster/swarm, then you have two options: a) where you let docker allocate resources per service b) where you allocate reseources yourself.

For running Nameles on a single server on an Ubuntu or Debian system:

You will have to create another shell, as in the shell where you run the setup now you will have a running docker instance.

NOTE: you need to have installed the postgreSQL client as detailed in section 1.2

The dsp-emulator module can be used as an example for interfacing Nameles from your infrastructure, i.e. message formatting and zeromq port bindings. The latency test source code is implemented in C++ but a different language for which zeromq is available could be used.

If the machine where Nameles is running reboots or is interrupted for another reason, you can restart with:

Note that after each command you have to start a new shell, as the current shell has a container running in it.

Ranjith - June 15, 2019
0
Salsa Tools is a collection of three different tools that combined, allows you to get a reverse shell on steroids in...

Ranjith - August 22, 2019
0
PEpper is an open source tool to perform malware static analysis on Portable Executable. Following are some of the features supported by the tool;

Ranjith - August 8, 2018
0
Apfell is a macOS, post-exploit, red teaming framework built with python3 and JavaScript. It's designed to provide a collaborative and user friendly interface for...

Ranjith - February 17, 2019
0
SSRF are often used to leverage actions on other services, this framework aims to find and exploit these services easily. SSRFmap takes...

Ravi Sankar - July 15, 2015
0
Redirect all IPv6 traffic through your attacker machine with parasite6 Parasite6 is the arpspoof in IPv6 networks and also a part of the THC-IPv6 tools...

Ranjith - May 25, 2018
0
WMD is a python tool with an accumulation of IT security software. The product is incapsulated in "modules". The modules consists of unadulterated python...

Ranjith - March 13, 2019
0
Command injection is an attack in which the goal is execution of arbitrary commands on the host operating system via a vulnerable...