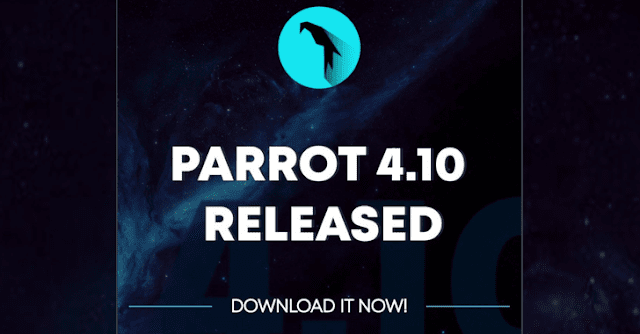 We ‘re proud to announce Parrot OS 4.10 launched. This new version contains loads of essential changes to make the distribution more stable and efficient.

You can download Parrot OS from our official download page, and we invite you to never trust third party and unofficial sources.

We also have official torrent files for virtual machines, and are ready to use OVA images.

How to upgrade from a previous version?

Parrot OS is a rolling distribution of releases, and updates flow in the repo as soon as they prove to be stable and dependable.

Version numbers (such as 4.8 or 4.9) are actually tags that we add to the current project status if we think there’s enough changes accrued in the folder to require a refresh of the ISO file. In fact each version of Parrot represents exactly a refresh of our ISO files to collect all the accumulated pieces together into something tested and reliable.

An existing system can be upgraded via APT by using one of the following commands:

AnonSurf 3.0 is ready, and has many significant features. Now it’s subdivided into three modules: GUI, Daemon and Utilities.

The GUI is written in NIM, a blazing fast programming language that is very easy to compile and read in native C code. It uses Gintro GTK for the gui and it has many features to let the anonsurf behavior be managed by the user.

You can start, stop and reload anonsurf, you can easily configure anonsurf to start automatically at boot, and thanks to its integration with NYX, it is simple to track tor status and see the traffic, logs and some usage statistics.

The new AnonSurf Daemon automatically shuts down the service when the user switches off the computer with anonsurf enabled, which was a known cause of later connectivity problems in previous versions, and corurse allows the user to tell the init system to start anonsurfing automatically at boot for those who need it.

Anon-surf also ships with some utilities, such as a CLI gui: the old, popular anon-surf command, which is now a daemon gui rather than a stand-alone tool.

We also delivered (and updated) dnstool, a system-wide program to easily monitor the actions of DNS resolution, which allows the user to select between static and dynamic configurations and use the servers supported by dhcp, the user’s option servers or the OpenNIC project servers.

Overall, AnonSurf is more reliable and more stable, and it is an important step forward for the entire project as we believe deeply in privacy and the role it plays in the fight for liberty.

Now Linux 5.7 comes with Parrot OS. No major improvements to this latest edition of the kernel:

Metasploit 6 ‘s development has finally begun, and it ships lots of awesome features that were missing from previous versions.

Knowing that this version will break retro-compatibility with previous versions is important, so it is important for our users to understand what has changed in this release.

Finally, one of the most wanted features is here: end-to – end encryption in meterpreter backdoors, which breaks retro-compatibility with older meterpreter payloads of course.

We now support the XFCE Desktop Environment, officially. Using input from our users we will develop it in later months and we want to include it as a legitimate alternative to MATE and KDE.

you can download the XFCE image from here https://download.parrot.sh/parrot/iso/4.10

KDE had a bug which prevented console tools from being started from the menu. This vulnerability was eventually fxed upstream in the KDE repos, but the patched version has not yet been released by debian, so Parrot 4.10 is still affected by this.

A special page will alert people trying to download the KDE edition and explain the issue, and will release updated images as soon as the fix is included in Debian.

The system is still usable, and the affected tools can still be launched from the console, and later system updates will automatically fix this.

VSCodium, VSCode’s open-source binary distribution with removed telemetry at source level, remains our default development tool, and has been upgraded to its latest version (1.47.3). Also Geany (with some Parrot customizations) is pre-installed on less powerful hardware for those running.

By default, Parrot now ships with Python 3.8, go 1.14 and gcc 10.1 and 9.3, and by adding nim support, we’ve improved our development metapackages.

Open a terminal window, type sudo apt display parrot-devel- and press TAB a few times to get the list of packages available from the bash autocompletion tool.

Complete the command with the package of your choice to find out more about the delivered features ( i.e. apt parrot-devel-golang show).

As always this version ships with all the latest updates from our upstream sources (mostly Debian), so any new patch, enhancement (or bug) is now also included in Parrot 4.10.

All the cool updates and security patches from upstream sources after the previous release are now part of the Parrot repository and also part of this latest release from the firefox client to the mate desktop environment.