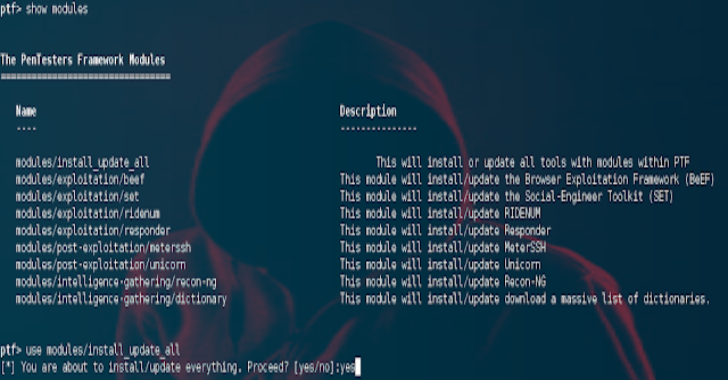 PTF( PenTesters Framework) is a Python script designed for Debian/Ubuntu/ArchLinux based distributions to create a similar and familiar distribution for Penetration Testing.

As pentesters, we’ve been accustom to the /pentest/ directories or our own toolsets that we want to keep up-to-date all of the time. We have those “go to” tools that we use on a regular basis, and using the latest and greatest is important.

PTF attempts to install all of your penetration testing tools (latest and greatest), compile them, build them, and make it so that you can install/update your distribution on any machine.

Everything is organized in a fashion that is cohesive to the Penetration Testing Execution Standard (PTES) and eliminates a lot of things that are hardly used. PTF simplifies installation and packaging and creates an entire pentest framework for you.

Since this is a framework, you can configure and add as you see fit. We commonly see internally developed repos that you can use as well as part of this framework. It’s all up to you.

The ultimate goal is for community support on this project. We want new tools added to the github repository. Submit your modules. It’s super simple to configure and add them and only takes a few minute.

First check out the config/ptf.config file which contains the base location of where to install everything. By default this will install in the /pentest directory. Once you have that configured, move to running PTF by typing ./ptf (or python ptf).

This will put you in a Metasploitesque type shell which has a similar look and feel for consistency. Show modules, use <modules>, etc. are all accepted commands. First things first, always type help or ? to see a full list of commands.

If you want to install and/or update everything, simply do the following:

This will install all of the tools inside of PTF. If they are already installed, this will iterate through and update everything for you automatically.

You can also individually install each module, then use the use modules/update_installed which will only update what you’ve previously installed.

This will only update previous ones you’ve installed.

You can also show options to change information about the modules.

If you only want to install only for example exploitation tools, you can run:

This will only install the exploitation modules. You can do this for any module category.

Customise Your Own Installed Tools

You can only install the tools you want to by going to the modules/custom_list/list.py section. Modify the list.py file and add the tools you only want to install or update.

Then when in PTF:

This allows you to carry your module configuration over and only install the tools that you want and keep them updated.

First, head over to the modules/ directory, inside of there are sub directories based on the Penetration Testing Execution Standard (PTES) phases. Go into those phases and look at the different modules. As soon as you add a new one, for example testing.py, it will automatically be imported next time you launch PTF. There are a few key components when looking at a module that must be completed.

Below is a sample module

All of the fields are pretty easy, on the repository locations, you can use GIT, SVN or FILE. Fill in the depends, and where you want the install location to be. PTF will take where the python file is located (for example exploitation) and move it to what you specify in the PTF config (located under config). By default it installs all your tools to /pentest/PTES_PHASE/TOOL_FOLDER

Note in modules, you can specify after commands {INSTALL_LOCATION}. This will append where you want the install location to go when using after commands.

You can also specify {PTF_LOCATION} which will pull the base path for your PTF installation.

You also have the ability for repository locations to specify both a 32 bit and 64 bit location. Repository location should always be the x86 download path. To add a 64 bit path for a tool, specify X64_LOCATION and give it a URL. When PTF launches it will automatically detect the architecture and attempt to use the x64 link instead of the x86.

Note that ArchLinux packages are also supported, it needs to be specified for both DEBIAN and ARCH in order for it to be properly installed on either platform in the module

You can create your own modules and also supports gitlab access. Instead of specify git, wget, etc., simply specify gitlab and point to your own internal gitlab tools for modules.

When using traditional git or svn as a main method, what will happen after a module is installed is it will just go and grab the latest version of the tool. With after commands, normally when installing, you may need to run the after commands after each time you update.

If you specify bypass updates to YES (BYPASS_UPDATE="YES"), each time the tool is run, it will check out the latest version and still run after commands. If this is marked to no, it will only git pull the latest version of the system. For FILE options, it is recommended to always use BYPASS_UPDATE="YES" so that it will overwrite the files each time.

After commands are commands that you can insert after an installation. This could be switching to a directory and kicking off additional commands to finish the installation.

For example in the BEEF scenario, you need to run ruby install-beef afterwards. Below is an example of after commands using the {INSTALL_LOCATION} flag.

For AFTER_COMMANDS that do self install (don’t need user interaction).

The flag LAUNCHER= in modules is optional. If you add LAUNCHER="setoolkit" for example, PTF will automatically create a launcher for the tool under /usr/local/bin/. In the setoolkit example, when run – PTF will automatically create a file under /usr/local/bin/setoolkit so you can launch SET from anywhere by simply typing setoolkit. All files will still be installed under the appropriate categories, for example /pentest/exploitation/setoolkit however an automatic launcher will be created.

You can also just run ./ptf --update-all and it will automatically update everything for you without having to go into the framework.

If you’re running ptf in an automatic build, you can use a heredoc so you don’t have to interactively type the modules you wish to install. Example:

Some tools such as Veil, SET, etc. require tools such as the Metasploit Framework. You can add in the module TOOL_DEPEND="modules/exploitation/metasploit,module/exploitation/set" and multiple other tools if there is a tool required to be installed prior to installing the tool. This will force PTF to install the required tool first, then install the module that requires it. Example:

This will install Metasploit first or ensured its installed first prior to installing the application.

The IGNORE_THESE_MODULES= config option can be found under config/ptf.config in the PTF root directory.

IGNORE Modules from Update/Install All

The IGNORE_UPDATE_ALL_MODULES= config option can be found under config/ptf.config in the PTF root directory. This will ignore modules only when doing install_update_all which are used when you want to install all tools.

This could be for large applications that take substantial time, ones that require user interaction, or open up a number of ports and protocols on the system. This works very similar in the IGNORE_THESE_MODULES, except that they can be manually installed and updated through the modules/update_installed.

The INCLUDE_ONLY_THESE_MODULES in the config option under config/ptf.config will only install and include specific modules that is specified here. This is good for baselining your tools that you want and only install them.