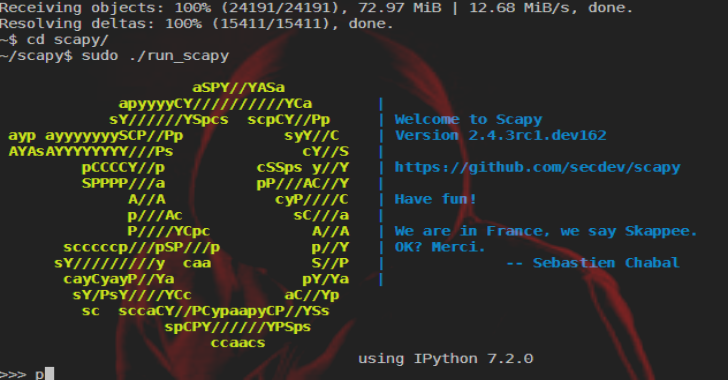 It is able to forge or decode packets of a wide number of protocols, send them on the wire, capture them, store or read them using pcap files, match requests and replies, and much more.

It is designed to allow fast packet prototyping by using default values that work.

It also performs very well at a lot of other specific tasks that most other tools can’t handle, like sending invalid frames, injecting your own 802.11 frames, combining techniques (VLAN hopping+ARP cache poisoning, VoIP decoding on WEP protected channel, …), etc.

It can easily be used as an interactive shell to interact with the network. The following example shows how to send an ICMP Echo Request message to github.com, then display the reply source IP address:

Scapy works without any external Python modules on Linux and BSD like operating systems. On Windows, you need to install some mandatory dependencies as described in the documentation.

On most systems, using Scapy is as simple as running the following commands:

To benefit from all Scapy features, such as plotting, you might want to install Python modules, such as matplotlib or cryptography. See the documentation and follow the instructions to install them.