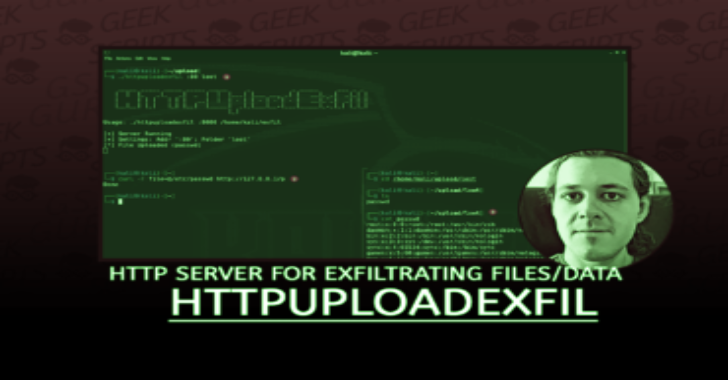 HTTPUploadExfil is a (very) simple HTTP server written in Go that’s useful for getting files (and other information) off a machine using HTTP. While there are many use-cases, it’s meant to be used in low-stakes offensive scenarios (e.g., CTFs).

Think of this as python3 -m http.server but for getting data off a machine instead of on the machine.

Obviously, this is a very loud and somewhat restricted way of exfiltrating data. Nevertheless, it’s quite handy and somewhat easier than, for example, using SMB or FTP. If you are looking for something more elegant, have a look at, for example, dnsteal or PyExfil.

If you need HTTPs, look at the information below.

While there are binaries available, it’s absolutely recommended to build this on your own. This way, you will have the newest version, and you will also know exactly what you’re running. The process is trivial:

Simply run go build within the folder, and you should get an httpuploadexfil executable for your platform.

If you make changes to the tool, remember to format using go fmt main.go.

The most common use case would be to run the server on Machine A. Now, on Machine B you access the upload form using a browser and select a file to exfiltrate. Of course, as you can see below, this can also be done using, for example, curl.

Aside from uploading files, you can also use HTTPUploadExfil to exfiltrate data using simple GET requests. If a request is sent to the \g endpoint, the whole request will be stored to disk.

Hence, you can exfiltrate data using the header of the request. It’s easiest to use GET parameters (e.g., ?data=...), but there are other options.

By default, HTTPUploadExfil will be served on port 8080. All files will be written to the current directory.

You can also provide some arguments:

The first argument is a bind address, the second one the folder to store files in.

The tool will also expose the files in the loot directory under the /l endpoint. This can be used as an easy way to bring files onto the target.

The webserver exposes four endpoints for you to use:

If the servers sees a HTTPUploadExfil.csr file, it will try to start in HTTPs mode. To go back to HTTP, simply remove or rename the certificate files.

Using Bash, we can exfil data using GET via, for example:

Of course, we can also use curl to exfil files: