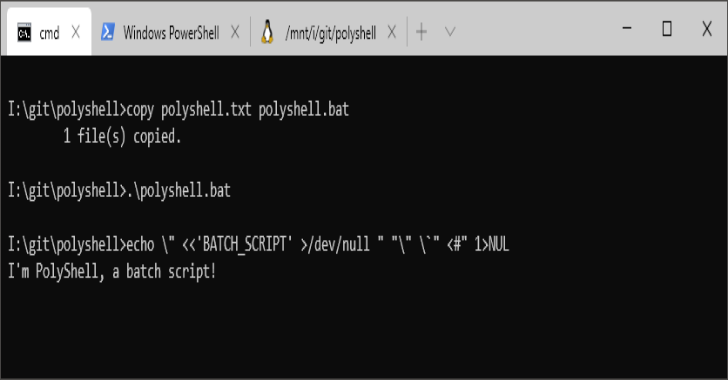 PolyShell is a script that’s simultaneously valid in Bash, Windows Batch, and PowerShell. This makes PolyShell a useful template for penetration testing as it can be executed on most systems without the need for target-specific payloads.

It is also specifically designed to be deliverable via input injection using a USB Rubby Ducky, MalDuino, or similar device.

How To Use It?

The input injection method will behave slightly differently than the script method. When run as a script, the payload will exit immediately once a language has been processed. When delivered via injection, the payload runs a read loop instead. Without it, the payload would close the terminal window but continue typing into an unknown window instead. The Ctrl-C breaks the script out of the read loop, allowing it run without unintended side-effects.

The main trick is to get each other language to “look away” when we want to run code specific to only one of them. This is accomplished by exploiting language quirks surrounding quoting, redirection, and comments.
Consider the following line:

Obviously, the tricks required to make this polyglot doesn’t follow normal coding conventions.
There are quite a few quirks that were leveraged or had to be worked around: